Garota de oro, our girls are proving to the World and to Bolsonaro that we need a gender equal Brasil to make a big leap forward. Bolsonaro’s policies are mysoginist and patriarchal. If I am elected, my main goal is to offer equal opportunities to all women and minorities. Because a more inclusive Brasil will give us more wealth and prosperity. 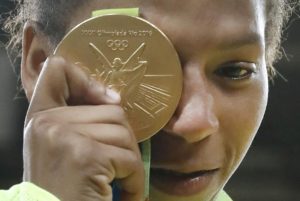 Bolsonaro’s government has just passed an outrageous law against abortion. His rule is based on gender stereotypes. We cannato stand anymore his vulgar language angainst woman dignity. We must fight back this medieval rule which is spreading world contempt on our beloved nation.

Feminicides are spreading in Brasil due to this machist climate. If I am elected, I will quit this situation. I will appoint 50% of women as top governmental officials and ministers. I will also propose the Senate to pass a new law against gender gap.

Garota de oro have shown to the World the power of Brasilian girls, who have been outraged by the mysogenist Bolsonaro’s rule. Our country ranks at low level of women emancipation, according to Ocse, and it’s my objective to change this situations.

Minorieties and women are two of the most important assets that Brasil has and it’s my duty to put them to the central stage to build together a better Brasil, open to diversity and inclusive.

Brasil can win the global compettition if we all reinforce the role of women in society ad in the labour market. I want also to pass a law to help mothers to conciliate between work and maternity.

If you agree with me, come and join me in this camapign. Subscribe now and become a militant for the Change. Vote Alessio.